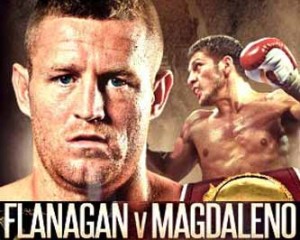 Review by AllTheBestFights.com: 2015-10-10, nice and tough exchanges between Terry Flanagan and Diego Magdaleno: it gets three stars.

The undefeated Terry Flanagan entered this fight with a perfect boxing record of 28-0-0 (11 knockouts) and he is ranked as the No.3 lightweight in the world (currently the #1 in this division is Jorge Linares). He has already fought twice in 2015 beating Stephen Ormond (=Flanagan vs Ormond) and Jose Zepeda (=Flanagan vs Zepeda).
His opponent, Diego Magdaleno, has an official record of 28-1-0 (12 knockouts) and he entered as the No.13 in the same weight class. He suffered his only loss in 2013 when he faced Roman Martinez (via split decision, Martinez vs Magdaleno), since then he has won five consecutive fights beating Jose A Gonzalez in his last one (=Magdaleno vs Gonzalez). Flanagan vs Magdaleno is valid for the WBO World lightweight title (Flanagan’s first defense). Watch the video and rate this fight!