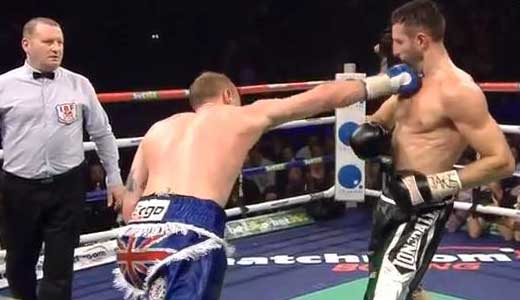 Review: 2013-11-23, very exciting fight thanks to an aggressive start, one knockdown and some wild exchanges in which both fighters exchanged shot for shot showing a solid chin and a big heart: Carl Froch vs George Groves is one of the best boxing fights of the year and it gets four stars (but we hope for a rematch in 2014). Carl Froch (31-2-0, 22 KOs) entered as the No.2 super middleweight in the world while the undefeated George Groves (19-0-0, 15 KOs=79%) entered as the No.6 (currently the #1 in this weight division is Andre Ward). Froch vs Groves is valid for the WBA and IBF super middleweight titles; they also faced each other a second time on May 31, 2014 (=Froch vs Groves 2). Watch the video!

Where: Phones 4u Arena, Manchester, UK

Their next fight: Carl Froch vs George Groves 2