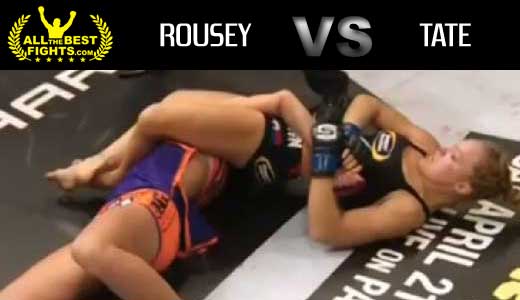 Review: 2012-03-03, very exciting fight, with an amazing work on the ground and a ferocious finish: Miesha Tate vs Ronda Rousey gets five stars and is a candidate for Mma Fight of the Year 2012 and mma submission of the year. Miesha Tate (12-2-0) entered as the No.1 women’s bantamweight in the world while Ronda Rousey (4-0-0) entered as the No.3. Tate vs Rousey is valid for the Strikeforce Women’s Bantamweight title (Tate’s first defense); they also faced each other a second time on December 28, 2012 (=Rousey vs Tate 2). Watch the video!