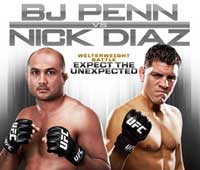 Review: 2011-10-29, nice and tough fight between BJ Penn and Nick Diaz: three stars. After a first balanced round, Nick Diaz dominates BJ Penn thanks to his boxing skills winning the fight by unanimous decision. BJ Penn (16-7-2) entered as the No.9 welterweight in the world while Nick Diaz (26-7-1) entered as the No.5. Penn vs Diaz was awarded as “Fight of the Night” (main event of the UFC 137). Watch the video!

(This is a free embeddable video hosted on Hulu.com Official TVGuide channel)

the fight BJ Penn vs Nick Diaz starts at 26:00 minute