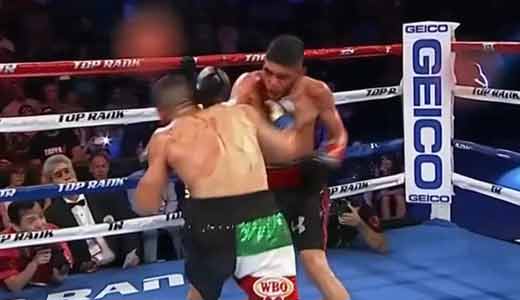 Review by AllTheBestFights.com: 2018-06-30, tough fight with some tremendous exchanges and one of the best rounds of the year: Alex Saucedo vs Leonardo Zappavigna is one of the best boxing fights of 2018 and it gets four stars!

The undefeated Alex Saucedo entered this fight with a perfect boxing record of 27-0-0 (17 knockouts) and he is ranked as the No.22 super lightweight in the world. In his last three fights he has won over Wilberth Lopez, Gustavo David Vittori and Abner Lopez.
His opponent, the former Ibo Lw champion Leonardo Zappavigna, has an official record of 37-3-0 (27 knockouts) and he entered as the No.58 welterweight. He lost to Sergey Lipinets in 2016 (Sergey Lipinets vs Leonardo Zappavigna) but then he has beat Fidel Monterrosa Munoz and Nestor Faccio. Saucedo vs Zappavigna is on the undercard of Gilberto Ramirez vs Roamer Angulo. Watch the video and rate this fight!

(Free embeddable video hosted on Dailymotion and not uploaded by AllTheBestFights)
https://www.dailymotion.com/video/x6oh2am