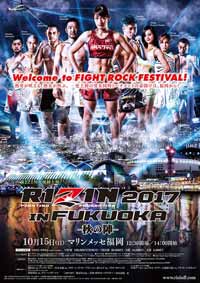 Review by AllTheBestFights.com: 2017-10-15, fight not particularly good between Andy Souwer and Akiyo Nishiura: it gets two stars.

The former ISKA, WKA and two-time K-1 World Max champion Andy Souwer entered this fight with a pro mma record of 2-2-0 (100% finishing rate) but he has a kickboxing record of 160-19-1. He lost to Daron Cruickshank (=Souwer vs Cruickshank) and Kazuyuki Miyata last year (=Souwer vs Miyata) but he came back to win in 2017 with Massaro Glunder.
His opponent, Akiyo Nishiura, has a record of 13-8-1 (38% ko/tko victory rate – he has never won via submission) but he is not ranked as he hasn’t fought since May 5, 2014 when he defeated by Ryogo Takahashi. Souwer vs Nishiura is on the undercard of Rena Kubota vs Andy Nguyen – Rizin FF 7. Watch the video and rate this fight!