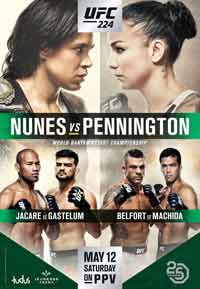 Review by AllTheBestFights.com: 2018-05-12, good exchanges between Alberto Mina and Ramazan Emeev: it gets three stars.

The undefeated black belt in Bjj and judo Alberto Mina entered this fight with a perfect record of 13-0-0 (92% finishing rate) but he is not ranked as he hasn’t fought since July 7, 2016 when he defeated Mike Pyle; before this bout, in 2015, he had beat Yoshihiro Akiyama (via split decision, Yoshihiro Akiyama vs Alberto Mina).
His opponent, the former World Combat Sambo and current M-1 Global Mw champion Ramazan Emeev, has a mma record of 16-3-0 (62% finishing rate) and he entered as the No.17 middleweight in the world. He lost to Vyacheslav Vasilevsky in 2014 (Vasilevsky vs Emeev) but then he has won five bouts taking revenge on Vasilevsky in 2015 (Vasilevsky vs Emeev 2) and beating Sam Alvey in 2017 (Sam Alvey vs Ramazan Emeev). Mina vs Emeev is on the undercard of Amanda Nunes vs Raquel Pennington – UFC 224. Watch the video and rate this fight! 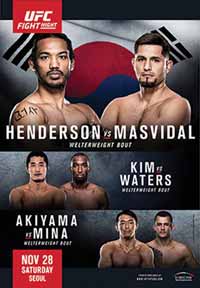