Review by AllTheBestFights.com: 2016-07-13, some good exchanges between Alexey Oleinik and Daniel Omielanczuk but it is not enough to get three stars: it gets two.

The black belt in jiu-jitsu and 2005 world combat sambo champion Alexey Oleinik (also known as Oleksiy Oliynyk) entered this fight with a professional record of 50-9-1 (90% finishing rate) but he is not ranked as he hasn’t fought since November 22, 2014 when he defeated Jared Rosholt (=Rosholt vs Oleinik).
His opponent, Daniel Omielanczuk, has a mma record of 18-5-1 (67% finishing rate) and he entered as the No.77 heavyweight in the world. He suffered two consecutive losses between 2014 and 2015, against Jared Rosholt and Anthony Hamilton but then he has won over Chris de la Rocha and Jarjis Danho. Oleinik vs Omielanczuk is on the undercard of Michael McDonald vs John Lineker – UFC Fight Night 91. Watch the video and rate this fight!

Review: 2014-11-22, aggressive start and great finish: Jared Rosholt vs Alexey Oleinik gets three stars (UFC Performance of the Night). Jared Rosholt entered this fight with a professional mma record of 11-1-0 (55% finishing rate) and he is ranked as the No.22 heavyweight in the world, he suffered his only defeat in 2012 when he faced Derrick Lewis, since then he has won seven consecutive bouts, the last one against Jared Rosholt (=Palelei vs Rosholt).
His opponent, the black belt in Brazilian jiu-jitsu and 2005 sambo world champion Alexey Oleinik, has an official record of 49-9-1 (90% finishing rate) and he entered as the No.19 in the same weight class, the last time he lost was in 2012, against Jeff Monson (via split decision Monson vs Oleinik); since then he has collected ten consecutive victories (nine via submission and one via tko), the last one against Anthony Hamilton. Rosholt vs Oleinik is on the undercard of Frankie Edgar vs Cub Swanson – UFC FN 57. Watch the video and rate this fight!

Review: 2013-11-08, Mirko Filipovic vs Alexey Oleinik gets three stars thanks to a good finish. Alexey Oleinik ranked as the No.23 heavyweight in the world, entered the fight with a record of 47-9-1 (90% finishing rate) while Mirko “Cro Cop” Filipovic had a record of 28-10-2 (89% finishing rate; on the original fight card Cro Cop was expected to face Alexander Emelianenko but Fedor’s brother is detained because he is accused of assaulting a 63-year-old man). Cro Cop vs Oleinik is the main event of “LEGEND Part 2: Invasion”. Watch the video!

Review: 2013-06-20, fight not particularly good between Jeff Monson and Alexey Oleinik: it gets two stars. Jeff Monson (49-14-1, 65% finishing rate) entered as the No.24 heavyweight in the world while Alexey Oleinik (43-9-1, 88% finishing rate) entered as the No.39. In their first fight Monson defeated Oleinik by split decision (March 16, 2012); this second fight is the main event of “Oplot Challenge”. Watch the video! 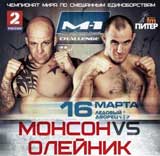