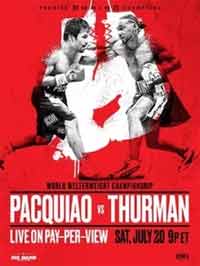 Review by AllTheBestFights.com: 2019-07-20, fight not particularly exciting between Efe Ajagba and Ali Eren Demirezen: it gets two stars.

Both undefeated and both former Olympian, the Nigerian Efe Ajagba entered this fight with a perfect boxing record of 10-0-0 (9 KOs=90%) and he is ranked as the No.50 heavyweight in the world while his opponent, Ali Eren Demirezen, has an official record of 11-0-0 (10 KOs=91%) and he entered as the No.33 in the same weight class. In their last three fights Ajagba has won over Santino Turnbow, Amir Mansour (Efe Ajagba vs Amir Mansour) and Michael Wallisch (Efe Ajagba vs Michael Wallisch) while Demirezen has beat Tornike Puritchamiashvili, Sergiej Werwejko and Adnan Redzovic. Ajagba vs Demirezen is on the undercard of Manny Pacquiao vs Keith Thurman. Watch the video and rate this fight!