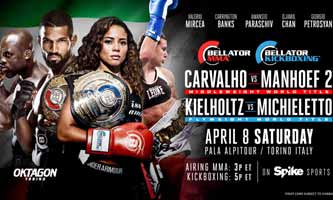 Review by AllTheBestFights.com: 2017-04-08, some good single shots between Giorgio Petrosyan and Amancio Paraschiv but it is not enough to get three stars: it gets two.

The former Glory and K-1 World Max champion Giorgio Petrosyan entered this fight with a professional kickboxing record of 84-2-2 (38 knockouts) and he is ranked as the No.4 super welterweight in the world while his opponent, the SuperKombat Lw champion Amansio Paraschiv, has an official record of 23-5-1 (10 knockouts). ‘The Doctor’ Petrosyan suffered his second defeat of his career during the semifinal of the Glory lightweight tournament against Andy Ristie in 2013 (=Petrosyan vs Andy Ristie), since then he has won eight bouts beating Jordan Watson (=Petrosyan vs Watson) and Artem Pashporin in his last two (=Petrosyan vs Pashporin); Paraschiv lost to Chris Ngimbi last year in October but then he took revenge on him one month later. Giorgio Petrosyan vs Amansio Paraschiv is on the undercard of Rafael Carvalho vs Melvin Manhoef 2 – Bellator 176 – Oktagon 2017. Watch the video and rate this fight!

Review by AllTheBestFights.com: 2015-03-07, too much holding and too many interruptions between Amansio Paraschiv and Julian Imeri: it gets two stars.

Amansio Paraschiv entered this fight with a kickboxing record of 15-2-1 (7 knockouts), he fought six times in 2014 winning four bouts but he drew with Cedric Manhoef (Users’ kickboxing Fight of the Year, Manhoef vs Paraschiv) and lost to Maxime Cerri (via majority decision); he has also fought three times in 2015 winning the Kunlun Fight 15 middleweight tournament.
His opponent, Julian Imeri, has a record of 33-4-2 and he beat Nader Farhou in his last fight of 2014 winning the WKA middleweight title. Paraschiv vs Imeri is valid for the SuperKombat New Heroes middleweight title; undercard of Benjamin Adegbuyi vs Daniel Lentie – SuperKombat WGP I 2015. Watch the video and rate this fight!