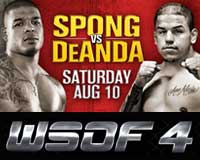 Review: 2013-08-10, poor ground game and too much striking: Tyrone Spong vs Angel DeAnda gets two stars. Angel DeAnda ranked as the No.46 light heavyweight in the world, entered the fight with a record of 11-2-0 (91% finishing rate; curiously he has never won by submission) while Tyrone Spong had a record of 1-0-0 (Spong is not ranked because he is at his second professional mma fight). Spong vs DeAnda is the main event of WSOF 4 – World Series of Fighting. Watch the video!