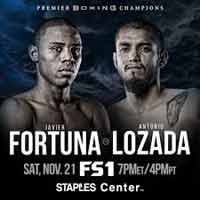 Review by AllTheBestFights.com: 2020-11-21, some good exchanges between Javier Fortuna and Antonio Lozada Torres but it is not enough to get three stars: it gets two.
The former world champion in two different weight classes Javier Fortuna entered this fight with a professional record of 35-2-1 (24 knockouts) and he is ranked as the No.7 lightweight in the world (currently the #1 in this division is Teofimo Lopez). He lost to Robert Easter Jr in 2018 (via split decision, Robert Easter Jr vs Javier Fortuna), then he accidently injured falling out of the ring with Adrian Granados (no decision bout, Javier Fortuna vs Adrian Granados) and he beat Sharif Bogere (Javier Fortuna vs Sharif Bogere) and Jesus Cuellar in his last two (Javier Fortuna vs Jesus Marcelo Andres Cuellar).
His opponent, Antonio Lozada Torres, has a boxing record of 40-4-1 (34 KOs=85%) and he entered as the No.181 super lightweight since his last victory was in 2018 against Christian Valverde; after this bout he tied with Hector Ruben Ambriz Suarez and he lost to Jose Pedraza (Jose Pedraza vs Antonio Lozada Jr) and Marco Antonio Juarez Rodriguez. Lozada vs Fortuna is the main event of the evening. Watch the video and rate this fight! 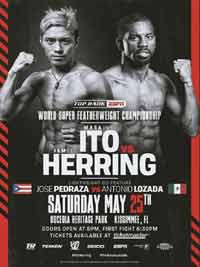 Review by AllTheBestFights.com: 2019-05-25, good fight between Jose Pedraza and Antonio Lozada Jr: it gets three stars.

The former Olympian and former world champion in two different weight classes Jose Pedraza entered this fight with a professional boxing record of 25-2-0 (12 knockouts) and he is ranked as the No.6 lightweight in the world but he comes off the loss against current #1 Lw Vasyl Lomachenko (Vasyl Lomachenko vs Jose Pedraza); before this bout, in 2018, he had beat Raymundo Beltran (Raymundo Beltran vs Jose Pedraza), Antonio Moran (Jose Pedraza vs Antonio Moran) and Jose Luis Rodriguez.
His opponent, Antonio Lozada Jr (Ines Antonio Lozada Torres), has an official record of 40-2-1 (34 KOs=85%) and he entered as the No.50 super lightweight. He fought three times last year defeating Felix Verdejo and Christian Valverde but then he tied with Hector Ruben Ambriz Suarez. Pedraza vs Lozada is valid for the vacant WBO Latino lightweight title; undercard of Masayuki Ito vs Jamel Herring. Watch the video and rate this fight!