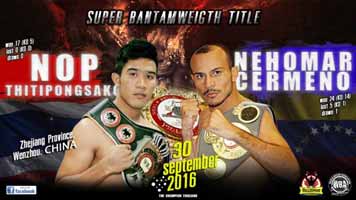 The Wba super-Bw champion Nehomar Cermeno entered this fight with a professional boxing record of 24-5-1 (14 knockouts) and he is ranked as the No.25 super bantamweight in the world. He suffered his last loss when he faced Alexander Bakhtin in 2012, since then he has collected four victories and one no-contest. Cermeno has already fought twice in 2016 beating Lester Medrano and XiaoJun Qiu.
His opponent, the undefeated Anurak Thisa (also known as Nop Kratingdaenggym), has a perfect record of 17-0-0 (5 knockouts) and he entered as the No.63 in the same weight class. He has also fought twice in 2016 winning over Junar Adante and Waldo Sabu. Cermeno vs Thisa is valid for the WBA World super bantamweight title (Cermeno’s first defense). Watch the video and rate this fight!