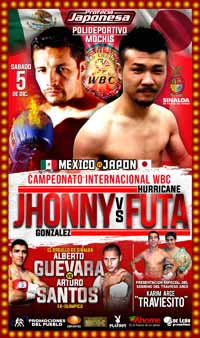 Review by AllTheBestFights.com: 2015-12-05, fight not particularly good between Alberto Guevara and Arturo Santos Reyes: it gets two stars.

Alberto Guevara entered this fight with a professional record of 22-2-0 (9 knockouts) and he is ranked as the No.34 super bantamweight in the world. He lost to Shinsuke Yamanaka in 2013 (=Yamanaka vs Guevara) but since then he has won four consecutive fights beating Rolando Magbanua in his last one (=Guevara vs Magbanua).
His opponent, Arturo Santos Reyes, has a boxing record of 18-5-0 (5 knockouts) and he entered as the No.37 featherweight but he comes off two defeats: against Simpiwe Vetyeka and Abner Mares (=Mares vs Reyes). ‘Metro’ Guevara vs Reyes is on the undercard of Jhonny Gonzalez vs Hurricane Futa. Watch the video and rate this fight! 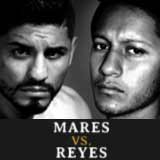 Review by AllTheBestFights.com: 2015-03-07, close bout with some some good exchanges between Abner Mares and Arturo Santos Reyes but it is not enough to get three stars: it gets two.

Abner Mares entered this fight with a boxing record of 28-1-1 (15 knockouts) and he is ranked as the No.8 featherweight in the world (currently the #1 in this division is Nicholas Walters), he has won world titles in three different weight classes but he lost his WBC Fw belt in 2013 when he suffered his first and only defeat against Jhonny Gonzalez (=Mares vs Gonzalez). Since then he came back to win beating Jonathan Oquendo (=Mares vs Oquendo) and Jose Ramirez (=Mares vs Ramirez).
His opponent, Arturo Santos Reyes, has an official record of 18-4-0 (5 knockouts) and he entered as the No.34 in the same weight class; he fought three times in 2014 defeating Julio Cesar Miranda and Jairo Hernandez but then he lost to Simpiwe Vetyeka. Mares vs Reyes is on the undercard of Keith Thurman vs Robert Guerrero. Watch the video and rate this fight!