Review: 2014-03-21, nice exchanges and good finish: David Rickels vs Patricky Freire gets three stars. David Rickels entered this fight with a pro mma record of 15-2-0 (67% finishing rate) and he is ranked as the No.29 lightweight in the world, last year he fought five times losing only to the Bellator champ Michael Chandler (=Chandler vs Rickels).
His opponent, Patricky ‘Pitbull’ Freire, has a record of 11-5-0 (73% finishing rate) and he entered as the No.98 in the same weight class, he is a black belt in Brazilian jiu-jitsu but he lost three fights out of his last four bouts. Rickels vs Freire is the quarterfinal of the Bellator lightweight tournament; undercard of Attila Vegh vs Emanuel Newton 2 – Bellator 113. Watch the video and rate this fight! 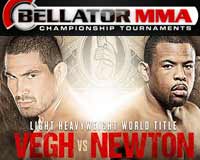