Review by AllTheBestFights.com: 2015-02-13, something good in the last part of the fight but the rest of the bout was pretty boring: Julia Budd vs Gabrielle Holloway gets two stars.

Julia Budd entered this fight with a professional mma record of 6-2-0 (67% finishing rate) and she is ranked as the No.2 women’s featherweight in the world, she suffered her last loss in 2011 when she faced Ronda Rousey; since then she has won four consecutive fights, the last one against Charmaine Tweet (=Budd vs Tweet).
Her opponent, Gabrielle Holloway, has an official record of 4-1-0 (50% finishing rate), she lost in 2013 against Latoya Walker but she came back to win in 2015 defeating Lacie Jackson. Budd vs Holloway is on the undercard of Alexander Shlemenko vs Melvin Manhoef – Bellator 133. Watch the video and rate this fight!

Review by AllTheBestFights.com: 2015-02-13, fight not particularly exciting between Pat Curran and Daniel Weichel: it gets two stars.

Pat Curran entered this fight with a mma record of 20-6-0 (60% finishing rate) and he is ranked as the No.8 featherweight in the world (currently the #1 in this division is Jose Aldo); he fought twice in 2014 defeating Daniel Straus (fight in which he won the Bellator Fw title for the second time Straus vs Curran 3) but then he lost the belt with Patricio ‘Pitbull’ Freire (=Curran vs Freire 2).
His opponent, Daniel Weichel, has an official record of 34-8-0 (76% finishing rate) and he entered as the No.14 in the same weight class, he suffered his last defeat in 2012 when he faced Musa Khamanaev (bout in which he lost the M-1 Global lightweight title Khamanaev vs Weichel); since then he has won six consecutive fights, the last one against Desmond Green (=Weichel vs Green). Curran vs Weichel is on the undercard of Alexander Shlemenko vs Melvin Manhoef – Bellator 133. Watch the video and rate this fight! 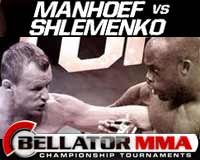