Review by AllTheBestFights.com: 2015-03-27, good performance by both fighters: LC Davis vs Hideo Tokoro gets three stars.

LC Davis entered this fight with a mma record of 22-6-0 (68% finishing rate) and he is ranked as the No.36 bantamweight in the world; he lost to Ryan Roberts in 2013 but then he came back to win beating Tory Bogguess and Zeilton Rodrigues (=Davis vs Rodrigues).
His opponent, Hideo Tokoro, has an official record of 32-27-2 (72% finishing rate) but he comes off two consecutive defeats, against Will Campuzano and Victor Henry. Davis vs Tokoro is on the undercard of Joe Warren vs Marcos Galvao 2 – Bellator 135. Watch the video and rate this fight!

Review by AllTheBestFights.com: 2015-03-27, some good exchanges in the second part but it is not enough to get three stars: Francis Carmont vs Guilherme Viana gets two.

Francis Carmont entered this fight with a professional mma record of 22-10-0 (73% finishing rate) and he is ranked as the No.24 middleweight in the world but he comes off three consecutive defeats: against Ronaldo ‘Jacare’ Souza (=Jacare vs Carmont), CB Dollaway (=Carmont vs Dollaway) and Thales Leites (=Leites vs Carmont).
His opponent, Guilherme Viana, has a record of 6-1-0 (100% finishing rate) and he entered as the No.67 light heavyweight. He suffered his only loss in 2012 when he faced Rodney Wallace, after this bout he has won three consecutive fights beating Julio Cesar dos Santos in his last one. Carmont vs Viana is on the undercard of Joe Warren vs Marcos Galvao 2 – Bellator 135. Watch the video and rate this fight!

Review by AllTheBestFights.com: 2015-03-27, fight not particularly good between Ryan Couture and Dakota Cochrane: it gets two stars. 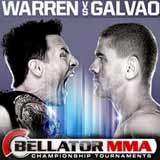 The 2006 Greco-Roman world champion wrestler and former Bellator Fw champion Joe Warren entered this fight with a pro mma record of 12-3-0 (33% finishing rate) and he is ranked as the No.7 bantamweight in the world (currently the #1 in this division is TJ Dillashaw). He suffered two consecutive defeats between 2011 and 2012, against Alexis Vila (=Vila vs Warren) and Pat Curran (=Curran vs Warren), but since then he has won five consecutive bouts winning the interim Bellator Bw title last year against Rafael Silva (=Warren vs Silva) and defending it with Eduardo Dantas (=Dantas vs Warren).
His opponent, the black belt in Brazilian jiu-jitsu Marcos Galvao, has an official record of 16-6-1 (25% ko/tko victory rate – he has never won via submission) and he entered as the No.34 in the same weight class. ‘Loro’ Galvao suffered his last defeat in 2013 when he faced Eduardo Dantas (=Dantas vs Galvao), after this bout he won three consecutive times beating Thomas Vasquez in his last fight (=Galvao vs Vasquez). Warren vs Galvao 2, main event of Bellator 135, is valid for the Bellator bantamweight title. Watch the video and rate this fight!