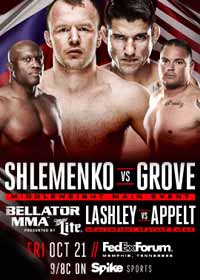 Review by AllTheBestFights.com: 2016-10-21, some good exchanges between Bobby Lashley and Josh Appelt but it is not enough to get three stars: it gets two.

The TNA and WWE wrestler Bobby Lashley entered this fight with a mma record of 14-2-0 (79% finishing rate) and he is ranked as the No.39 heavyweight in the world while his opponent, Josh Appelt, has an official record of 12-5-0 (83% finishing rate). Lashley suffered his last loss when he faced James Thompson in 2012 (=Thompson vs Lashley) and then he has won seven bouts taking revenge on Thompson in his last one (=Lashley vs Thompson 2) while Appelt lost three consecutive fights between 2014 and 2015 but then he has won over Joe Hernandez and Roy Boughton. Lashley vs Appelt is on the undercard of Alexander Shlemenko vs Kendall Grove – Bellator 162. Watch the video and rate this fight!

Review by AllTheBestFights.com: 2016-10-21, good exchanges between Alexander Shlemenko and Kendall Grove: it gets three stars.

The former Bellator and M-1 Mw champion Alexander Shlemenko entered this fight with a pro mma record of 53-9-0 (72% finishing rate) and he is ranked as the No.15 middleweight in the world. He suffered two consecutive defeats in 2014, against Tito Ortiz (fight in which he moved up in weight class to the light-Hw division, Shlemenko vs Ortiz) and Brandon Halsey (losing his Bellator title Shlemenko vs Halsey) but then he has won four bouts beating twice Vyacheslav Vasilevsky in 2016 (=Shlemenko vs Vasilevsky I and Shlemenko vs Vasilevsky II).
His opponent, the black belt in Brazilian jiu-jitsu and Tuf 3 winner Kendall Grove, has a record of 23-15-0 (74% finishing rate) and he entered as the No.26 in the same weight class. He lost to Brandon Halsey last year (=Halsey vs Grove) but then he has beat Joey Beltran (=Beltran vs Grove) and Francisco France (=Grove vs France). Shlemenko vs Grove is the main event of Bellator 162. Watch the video and rate this fight!