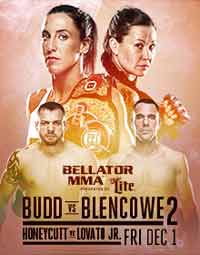 Review by AllTheBestFights.com: 2017-12-01, fight not so exciting between Rafael Lovato Jr and Chris Honeycutt: it gets two stars.

Chris Honeycutt entered this fight with a pro record of 10-1-0 (60% finishing rate) and he is ranked as the No.46 middleweight in the world. He suffered his only loss last year when he faced Paul Bradley in their rematch (=Bradley vs Honeycutt 2), after this bout he has won four fights beating Kevin Casey in 2017.
His opponent, the undefeated black belt in Bjj and former world jiu jitsu champion Rafael Lovato Jr, has a perfect record of 6-0-0 (100% finishing rate) and he entered as the No.68 in the same weight class. He has already fought twice in 2017 winning over Charles Hackmann and Mike Rhodes. Lovato vs Honeycutt is on the undercard of Julia Budd vs Arlene Blencowe 2 – Bellator 189. Watch the video and rate this fight! 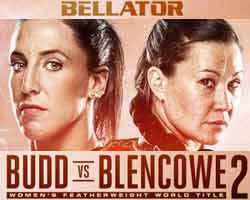 Review by AllTheBestFights.com: 2017-12-01, boring fight between Julia Budd and Arlene Blencowe 2: it gets one star!

The Bellator Fw champion Julia Budd entered this fight with a professional record of 10-2-0 (50% finishing rate) and she is ranked as the No.3 women’s featherweight in the world. She suffered her last loss when she faced Ronda Rousey in 2011, since then she has won eight consecutive bouts beating Arlene Blencowe in 2016 and Marloes Coenen in 2017 (=Coenen vs Budd).
Her opponent, Arlene Blencowe, has a mma record of 10-6-0 (60% finishing rate) and she entered as the No.7 in the same weight class. After losing to Budd last year she has fought three times in 2017 beating Sinead Kavanagh in her last bout. Budd vs Blencowe 2, main event of Bellator 189, is valid for the Bellator women’s featherweight title (Budd’s first defense). Watch the video and rate this fight!