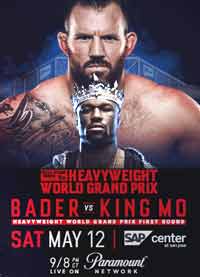 Review by AllTheBestFights.com: 2018-05-12, pretty good finish between Cheick Kongo and Javy Ayala: it gets three stars.

The black belt in karate and kendo Cheick Kongo entered this fight with a mma record of 27-10-2 (59% finishing rate) and he is ranked as the No.16 heavyweight in the world. He lost to Muhammed ‘King Mo’ Lawal in 2015 (Lawal vs Kongo) but then he has won five bouts beating Oli Thompson (Kongo vs Thompson) and Augusto Sakai in 2017 (Cheick Kongo vs Augusto Sakai).
His opponent, Javy Ayala, has an official record of 10-6-0 (90% finishing rate) and he entered as the No.43 in the same weight class but he comes off the loss against Roy Nelson (Roy Nelson vs Javy Ayala); before this bout, in 2016, he had beat Sergei Kharitonov (Kharitonov vs Ayala). Kongo vs Ayala is on the undercard of Ryan Bader vs Muhammed King Mo Lawal – Bellator 199. Watch the video and rate this fight!

END_OF_DOCUMENT_TOKEN_TO_BE_REPLACED

Review by AllTheBestFights.com: 2018-05-12, boring fight between Jon Fitch and Paul Daley: it gets one star!

The current Wsof/PFL Ww champion Jon Fitch entered this fight with a pro mma record of 30-7-1 (37% finishing rate) and he is ranked as the No.16 welterweight in the world. He suffered his last loss when he faced Rousimar Palhares in 2014 (Palhares vs Fitch) after this bout he has won four bouts beating Jake Shields (Fitch vs Shields) and Brian Foster in his last two (Jon Fitch vs Brian Foster).
His opponent, Paul Daley, has a record of 40-15-2 (80% finishing rate) and he entered as the No.17 in the same weight class. Semtex Daley fought three times last year defeating Brennan Ward (4-stars fight, Daley vs Ward) and Lorenz Larkin (Lorenz Larkin vs Paul Daley) but between these two bouts he lost Rory MacDonald (MacDonald vs Daley). Fitch vs Daley is on the undercard of Ryan Bader vs Muhammed King Mo Lawal – Bellator 199. Watch the video and rate this fight!

END_OF_DOCUMENT_TOKEN_TO_BE_REPLACED 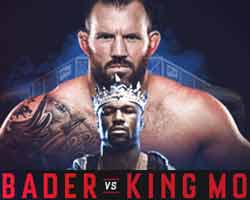 Review by AllTheBestFights.com: 2018-05-12, fight not so exciting between Ryan Bader and Muhammed Lawal: it gets two stars.

The Bellator light-Hw champion and Tuf 8 tournament winner Ryan Bader entered this fight with a professional mma record of 24-5-0 (54% finishing rate) and he is ranked as the No.2 light heavyweight in the world (currently the #1 in this division is Daniel Cormier). He lost to Anthony Johnson in 2016 (Johnson vs Bader) but then he has won four bouts beating Phil Davis (Davis vs Bader 2) and Linton Vassell in 2017 (Ryan Bader vs Linton Vassell).
His opponent, the former Strikeforce light-Hw champion Muhammed King Mo Lawal, has an official record of 21-6-0 (62% finishing rate) and he entered as the No.13 heavyweight. He was defeated by Mirko Cro Cop Filipovic in 2016 (Cro Cop vs Lawal) but he came back to win in 2017 with Quinton Rampage Jackson (Quinton Rampage Jackson vs Muhammed King Mo Lawal 2). Bader vs King Mo, main event of Bellator 199, is the quarterfinal of the Bellator Heavyweight World Grand Prix Tournament. Watch the video and rate this fight!