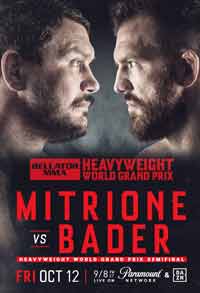 Review by AllTheBestFights.com: 2018-10-12, pretty good finish between Roy Nelson and Sergei Kharitonov: it gets three stars.

The black belt in Brazilian jiu-jitsu and Tuf Hw tournament winner Roy Nelson entered this fight with a pro mma record of 23-15-0 (83% finishing rate) and he is ranked as the No.19 heavyweight in the world but he lost two out of his last three fights, against Alexander Volkov (Nelson vs Volkov) and Matt Mitrione (Roy Nelson vs Matt Mitrione 2); between these two bouts he beat Javy Ayala (Roy Nelson vs Javy Ayala).
His opponent, Sergei Kharitonov, has a record of 27-6-0 (93% finishing rate) and he entered as the No.30 in the same weight class. He lost to Javy Ayala in 2016 (Kharitonov vs Ayala) but then he has collected four victories and one no-contest, against Anotn Vyazigin (originally a majority decision for Sergei then overturned due to an accidental eye poke, Sergei Kharitonov vs Anton Vyazigin); before this bout he had defeated Joey Beltran (Sergei Kharitonov vs Joey Beltran). Nelson vs Kharitonov is on the undercard of Ryan Bader vs Matt Mitrione – Bellator 207. Watch the video and rate this fight!

END_OF_DOCUMENT_TOKEN_TO_BE_REPLACED 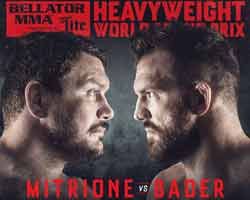 Review by AllTheBestFights.com: 2018-10-12, some good exchanges between Ryan Bader and Matt Mitrione but it is not enough to get three stars: it gets two.

The black belt in Bjj, Bellator light-Hw champion and Tuf 8 tournament winner Ryan Bader entered this fight with a professional mma record of 25-5-0 (56% finishing rate) and he is ranked as the No.5 heavyweight in the world (currently the #1 in this division is Daniel Cormier). He lost to Anthony Johnson in 2016 (Johnson vs Bader) but then he has won five bouts beating Phil Davis (Davis vs Bader 2), Linton Vassell (Ryan Bader vs Linton Vassell) and Muhammed King Mo Lawal in his last three (Ryan Bader vs Muhammed King Mo Lawal).
His opponent, the black belt in karate Matt Mitrione, has an official record of 13-5-0 (85% ko/tko victory rate – he has never won via submission) and he entered as the No.13 in the same weight class. He lost two consecutive bouts between 2015 and 2016, against Ben Rothwell (Rothwell vs Mitrione) and Travis Browne (Browne vs Mitrione), but then he has won four fights beating Fedor Emelianenko (Fedor Emelianenko vs Matt Mitrione) and Roy Nelson in his last two (Roy Nelson vs Matt Mitrione 2). Bader vs Mitrione, main event of Bellator 207, is the semifinal of the Bellator Heavyweight Grand Prix tournament. Watch the video and rate this fight!