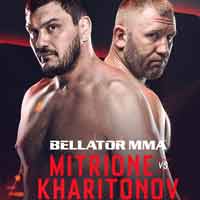 Review by AllTheBestFights.com: 2019-02-15, we hope to see a rematch soon… Matt Mitrione vs Sergei Kharitonov gets two stars.

The black belt in karate Matt Mitrione entered this fight with a professional mma record of 13-6-0 (85% ko/tko victory rate – he has never won via submission) and he is ranked as the No.13 heavyweight in the world. He fought twice last year beating Roy Nelson (Roy Nelson vs Matt Mitrione 2) and losing to Ryan Bader (Ryan Bader vs Matt Mitrione).
His opponent, Sergei Kharitonov, has an official record of 28-6-0 (93% finishing rate) and he entered as the No.17 in the same weight class. He lost to Javy Ayala in 2016 (Kharitonov vs Ayala) but then he has collected five victories and one no-contest, against Anotn Vyazigin (originally a majority decision for Sergei then overturned due to an accidental eye poke, Sergei Kharitonov vs Anton Vyazigin); after this bout, in his last one, he has defeated Roy Nelson (Roy Nelson vs Sergei Kharitonov). Mitrione vs Kharitonov is the main event of Bellator 215. Watch the video and rate this fight!