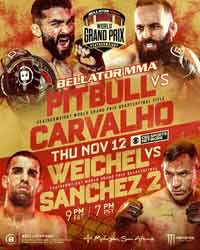 Review by AllTheBestFights.com: 2020-11-12, close fight but not so exciting: Yaroslav Amosov vs Logan Storley gets two stars.
Both undefeated, the three-time world champion in sambo Yaroslav Amosov entered this fight with a perfect mma record of 24-0-0 (79% finishing rate) and he is ranked as the No.51 welterweight in the world while his opponent, Logan Storley, has an official record of 11-0-0 (73% ko/tko victory rate – he has never won via submission) and he entered as the No.57 in the same weight class. In their last three bouts Amosov has won over David Rickels, Ed Ruth (Ed Ruth vs Yaroslav Amosov) and Mark Lemminger while Storley has beat AJ Matthews, Ion Pascu and EJ Brooks. Storley vs Amosov is on the undercard of Patricio Freire vs Pedro Carvalho – Bellator 252. Watch the video and rate this fight! 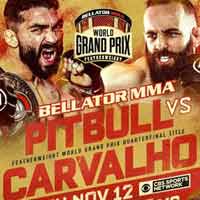 Review by AllTheBestFights.com: 2020-11-12, pretty good fight between Patricio Freire and Pedro Carvalho: it gets three stars.
The black belt in Brazilian jiu-jitsu, current Bellator Fw and Lw champion Patricio Freire entered this fight with a professional mma record of 30-4-0 (70% finishing rate) and he is ranked as the No.4 featherweight in the world (currently the #1 in this division is Alexander Volkanovski). Patricio ‘Pitbull’ lost to Benson Henderson in 2016 (Henderson vs Freire) but then he has won five bouts defeating Michael Chandler (Michael Chandler vs Patricio Freire) and Juan Archuleta in his last two (Patricio Freire vs Juan Archuleta).
His opponent, Pedro Carvalho, has an official record of 11-3-0 (73% finishing rate) and he entered as the No.25 in the same weight class. He lost two consecutive bouts in 2015, against Wisma Lima and Adenir Araujo, but then he has won six fights beating Derek Campos and Sam Sicilia in 2019. Carvalho vs Pitbull Freire, main event of the Bellator 252, is the quarter-final of the Bellator Fw World Grand Prix and it is valid for the Bellator featherweight title (Freire’s fourth defense). Watch the video and rate this fight!
FOLLOW US ON