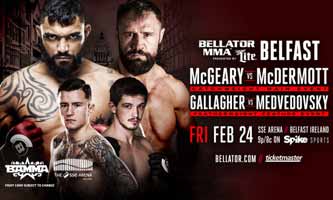 Review by AllTheBestFights.com: 2017-02-24, good performance by both fighters: Liam McGeary vs Brett McDermott gets three stars.

The former Bellator light-Hw champion Liam McGeary entered this fight with a pro mma record of 11-1-0 (91% finishing rate) and he is ranked as the No.10 light heavyweight in the world (currently the #1 in this division is Jon Jones) while his opponent, Brett McDermott, has a record of 7-4-0 (86% ko/tko victory rate – he has never won via submission). McGeary fought just once last year losing to Phil Davis (=McGeary vs Davis) while McDermott fought three times beating Jamie Sloane and Dan Konecke but between these two bouts he was defeated by Kenneth Bergh. Liam McGeary vs Brett McDermott is the main event of Bellator 173. Watch the video and rate this fight!

Review by AllTheBestFights.com: 2015-12-29, pretty good finish between Muhammed ‘King Mo’ Lawal and Brett McDermott but it is not enough to get three stars: it gets two.