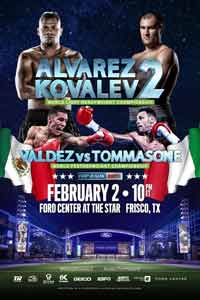 Review by AllTheBestFights.com: 2019-02-02, good finish but the rest of the fight was not so exciting: Oscar Valdez vs Carmine Tommasone gets two stars.

Both undefeated and Olympian, the current Wbo Fw champion Oscar Valdez entered this fight with a perfect boxing record of 24-0-0 (19 KOs=79%) and he is ranked as the No.2 featherweight in the world (currently the #1 in this division is Leo Santa Cruz) while his opponent, Carmine Tommasone, has a record of 19-0-0 (5 knockouts) but he entered as the No.96 in the same weight class. In their last three bouts Valdez has defeated Miguel Marriaga (4-stars fight, Oscar Valdez vs Miguel Marriaga), Genesis Servania (Oscar Valdez vs Genesis Servania) and Scott Quigg (Oscar Valdez vs Scott Quigg) while Tommasone has beat Lesther Cantillano, Milan Savic and Giovanny Martinez. Valdez vs Tommasone is valid for the WBO World featherweight title (Valdez’ fifth defense); undercard of Eleider Alvarez vs Sergey Kovalev 2. Watch the video and rate this fight!