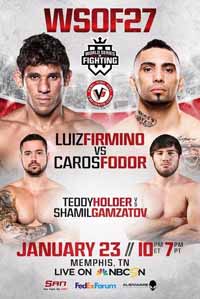 Review by AllTheBestFights.com: 2016-01-23, disappointing fight between Luiz Firmino and Caros Fodor: it gets two stars.

The black belt in Bjj Luiz Firmino entered this fight with a mma record of 18-6-0 (44% finishing rate) and he is ranked as the No.38 lightweight in the world. He suffered two consecutive defeats between 2010 and 2011, against Francisco Trinaldo and John Alessio, but then he has won five bouts beating Tyson Griffin in his last one (=Firmino vs Griffin).
His opponent, Caros Fodor, has an official record of 10-4-0 (70% finishing rate) but he is not ranked as he hasn’t fought since September 12, 2014 when he defeated Vincent Latoel. ‘Buscape’ Firmino vs Fodor is the main event of WSOF 27. Watch the video and rate this fight!

Review: 2012-03-03, even with a good submission in the third round, the fight between Caros Fodor and Pat Healy has not been particularly exciting: two stars. Caros Fodor (7-1-0) entered as the No.38 lightweight in the world while Pat Healy (26-16-0) entered as the No.17. Fodor vs Healy is on the undercard of Miesha Tate vs Ronda Rousey (Strikeforce). Watch the video!

Review: good test for Caros Fodor on David Douglas (Strikeforce Challengers 15) but the pace and level of the fight are not very high: 2 stars. Watch the video!