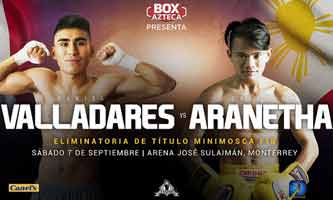 Review by AllTheBestFights.com: 2019-09-07, pretty good fight between Daniel Valladares and Christian Araneta: it gets three stars.

Daniel Valladares entered this fight with a pro record of 20-1-0 (12 knockouts) and he is ranked as the No.7 light flyweight in the world (currently the #1 in this division is Ken Shiro). He suffered his only loss when he faced Genaro Rios in 2016 (via majority decision), since then he has won nine bouts defeating Gilbert Gonzalez and Merlito Sabillo in 2019.
His opponent, the undefeated Christian Araneta, has a perfect record of 17-0-0 (14 KOs=82%) and he entered as the No.37 in the same weight class. He fought three times last year winning over Ian Ligutan, Jerry Tomogdan and Vincent Bautista. Valladares vs Araneta is valid as IBF final junior flyweight title eliminator. Watch the video and rate this fight!