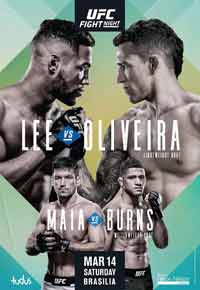 Review by AllTheBestFights.com: 2020-03-14, fight not so exciting between Renato Moicano Carneiro and Damir Hadzovic: it gets two stars.

The black belt in Brazilian jiu-jitsu Renato Moicano Carneiro entered this fight with a mma record of 13-3-1 (46% submission victory rate – he has never won via ko/tko) and he is ranked as the No.18 featherweight in the world but he comes off two consecutive losses, against Jose Aldo (Jose Aldo vs Renato Moicano Carneiro) and Chan Sung Jung (Renato Moicano Carneiro vs Chan Sung Jung; before this bout, in 2018, he had beat Cub Swanson (Cub Swanson vs Renato Carneiro).
His opponent, Damir Hadzovic, has an official record of 13-5-0 (77% finishing rate) and he entered as the No.68 lightweight. He fought twice last year defeating Marco Polo Reyes and losing to Christos Giagos. Moicano vs Hadzovic is on the undercard of Kevin Lee vs Charles Oliveira – UFC Fight Night 170. Watch the video and rate this fight!