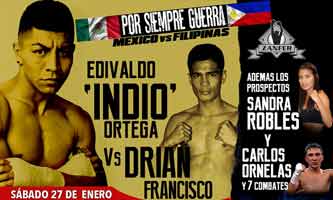 Review by AllTheBestFights.com: 2018-01-27, fight not particularly good between Edivaldo Ortega and Drian Francisco: it gets two stars.

Edivaldo Ortega entered this fight with a pro record of 25-1-1 (12 knockouts) and he is ranked as the No.19 featherweight in the world. He was defeated by Eduardo Ramirez in 2016 but he came back to win in 2017 with Tomas Rojas (=Ortega vs Rojas).
His opponent, the former interim Wba super-Flw champion Drian Francisco, has an official boxing record of 29-4-1 (22 KOs=76%) but he lost two out of his last four bouts, against Jason Canoy and Guillermo Rigondeaux in 2015 (=Rigondeaux vs Francisco); he came back to win in 2017 with Mateo Handig. Indio Ortega vs Francisco is the main event of the evening. Watch the video and rate this fight! 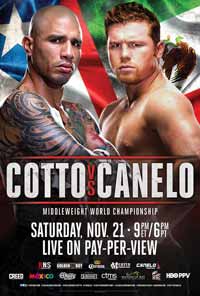 Review by AllTheBestFights.com: 2015-11-21, very boring fight between Guillermo Rigondeaux and Drian Francisco: it gets one star.

The undefeated two-times Olympic gold medalist and Wbo super-Bw champion Guillermo Rigondeaux entered this fight with a perfect record of 15-0-0 (10 knockouts) and he is ranked as the No.2 super bantamweight in the world (currently the #1 in this division is Carl Frampton). He fought twice last year beating Sod Kokietgym (=Rigondeaux vs Kokietgym) and Hisashi Amagasa (=Rigondeaux vs Amagasa).
His opponent, the former interim Wba super flyweight champion Drian Francisco, has a record of 28-3-1 (22 KOs=76%) and he entered as the No.96 featherweight. He has fought three times in 2015 winning over Jason Egera and Jilo Merlin but between these two bouts he lost to Jason Canoy. Rigondeaux vs Francisco is on the undercard of Miguel Cotto vs Saul Canelo Alvarez. Watch the video and rate this fight!