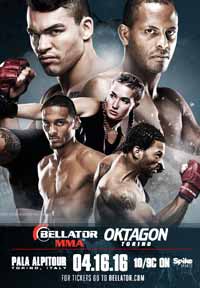 Review by AllTheBestFights.com: 2016-04-16, boring fight between Patricky Freire and Kevin Souza: it gets one star.

The black belt in Brazilian jiu-jitsu Patricky Freire entered this fight with a professional mma record of 15-7-0 (73% finishing rate) and he is ranked as the No.31 lightweight in the world. He lost to Derek Anderson last year (=Freire vs Anderson 2) but he came back to win in 2016 beating Ryan Couture (=Freire vs Couture).
His opponent, Edimilson Souza, has an official record of 15-4-0 (93% finishing rate) and he entered as the No.52 featherweight but he comes off the loss against Chas Skelly. ‘Pitbull’ Freire vs Souza is the main event of the Bellator 152. Watch the video and rate this fight!