Review by AllTheBestFights.com: 2018-04-13, some good exchanges but with too many interruptions: Edner Cherry vs Dennis Galarza gets two stars.

Edner Cherry entered this fight with a boxing record of 36-7-2 (19 knockouts) but he is not ranked as he hasn’t fought since April 4, 2017 when he defeated Omar Douglas. Before this bout he had beat Haskell Rhodes in 2016 and he lost to Jose Pedraza in 2015 (Jose Pedraza vs Edner Cherry).
His opponent, Dennis Galarza, has an official record of 16-2-0 (9 knockouts) and he entered as the No.80 lightweight in the world. He lost to Cesar Alan Valenzuela in 2016 but then he has won over Edgardo Rivera, Jonathan Perez and Omar Tienda. Cherry vs Galarza is on the undercard of Jamal James vs Abel Ramos. Watch the video and rate this fight!

END_OF_DOCUMENT_TOKEN_TO_BE_REPLACED 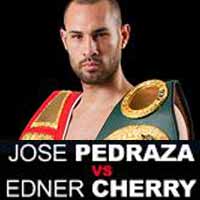 Review by AllTheBestFights.com: 2015-10-03, close fight but not so exciting: Jose Pedraza vs Edner Cherry gets two stars.

The undefeated Jose Pedraza entered this fight with a perfect boxing record of 20-0-0 (12 knockouts) and he is ranked as the No.4 super featherweight in the world (currently the #1 in this division is Takashi Uchiyama). He has already fought once in 2015 winning the vacant IBF belt against Andrey Klimov.
His opponent, Edner Cherry, has a record of 34-6-2 (19 knockouts) and he entered as the No.21 in the same weight class. He suffered his last loss in 2008 when he faced Timothy Bradley, since then he has collected ten victories and one no-contest. Pedraza vs Cherry is valid for the IBF World super featherweight title (Pedraza’s first defense); undercard of Adrien Broner vs Khabib Allakhverdiev. Watch the video and rate this fight!

END_OF_DOCUMENT_TOKEN_TO_BE_REPLACED

Review: 2014-10-18, pretty good finish between Edner Cherry and Osumanu Akaba but it is not enough to get three stars. Edner Cherry entered this fight with a pro boxing record of 32-6-2 (17 knockouts) and he is ranked as the No.24 lightweight in the world, he suffered his last loss in 2008 when he faced then-undefeated Timothy Bradley in a fight valid for the Wbc light-Ww title; since then he has collected eight wins and one no-contest.
His opponent, Osumanu Akaba, has a record of 31-6-1 (24 KOs=77%) and he replaces Jerry Belmontes; Akaba has fought once in 2014 losing to Bahodir Mamadjonov. Cherry vs Akaba is on the undercard of Steve Cunningham vs Natu Visinia. Watch the video and rate this fight!