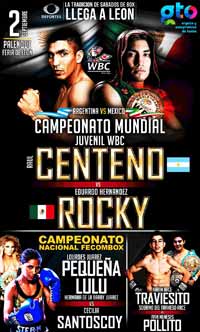 Review by AllTheBestFights.com: 2017-09-02, pretty good fight between Eduardo Hernandez and Raul Centeno: it gets three stars.

The undefeated Eduardo Hernandez entered this fight with a pro boxing record of 23-0-3 (19 KOs=83%) and he is ranked as the No.17 super featherweight in the world. He has already fought twice in 2017 winning over Hugo Alfredo Santillan and Rolando Magbanua.
His opponent, Raul Horacio Centeno, has an official record of 20-3-1 (8 knockouts) but he lost two out of his last three fights: against Carlos Ruiz and Vicente Martin Rodriguez; after this bout he came back to win with Esteban Miguel Stodulski. Eduardo Hernandez vs Raul Horacio Centeno is valid for the WBC Youth World Super Featherweight title. Watch the video and rate this fight!