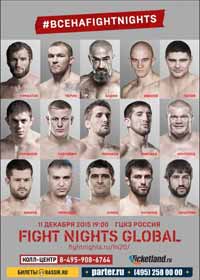 Review by AllTheBestFights.com: 2015-12-11, good fight between Vitaly Minakov and Josh Copeland: it gets three stars.

The undefeated black belt in judo, former world combat sambo and Bellator Hw champion Vitaly Minakov entered this fight with a perfect record of 16-0-0 (87% finishing rate) and he is ranked as the No.15 heavyweight in the world. He has fought twice in 2015 beating Adam Maciejewski and Geronimo dos Santos (=Minakov vs dos Santos).
His opponent, Josh Copeland, has an official mma record of 9-2-0 (78% finishing rate) and he entered as the No.76 in the same weight class but he comes off two consecutive losses: against Ruslan Magomedov and Jared Rosholt. Minakov vs Copeland is the main event of “EFN – Fight Nights Battle 20”. Watch the video and rate this fight!