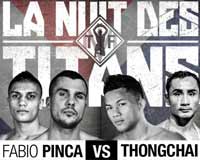 Review: 2014-02-08, nice and tough fight between Fabio Pinca and Thongchai Sitsongpeenong: it gets three stars. Fabio Pinca entered this fight with a professional kickboxing record of 91-21-4 (33 knockouts) and he is ranked as the No.4 welterweight in the world, he fought seven times in 2013 losing only to Sitthichai Sitsongpeenong and against Victor Nagbe but this last was a controversial decision (=Pinca vs Nagbe).
His opponent comes from Thailand, Thongchai Sitsongpeenong, has an official record of 87-40-0 and he entered as the No.4 super welterweight, he is just 18 years old (eleven years younger than Pinca) but last year he won the Lumpinee Stadium welterweight title!! Pinca vs Thongchai is the main event of “La Nuit des Titans 2014”. Watch the video and rate this fight! 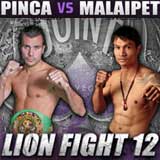 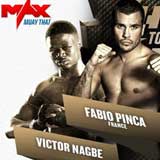 Review: 2012-06-09, good fight between Fabio Pinca and Big Ben Ch. Praram 6: three stars (fight ended by split decision). Fabio Pinca ranked as the No.9 welterweight in the world, entered the fight with a record of 84-17-4. Pinca vs Big Ben is valid for the WBC Welterweight title (Battle for the Belts). Watch the video!

Review: 2012-05-26, tough and balanced fight between Giorgio Petrosyan and Fabio Pinca: three stars (fight ended by unanimous decision). Giorgio Petrosyan (72-1-2) entered as the No.1 super welterweight in the world while Fabio Pinca (84-17-4) entered as the No.9 welterweight. Petrosyan vs Pinca 2, undercard of Schilt vs Zimmerman 2, is valid for the Glory World Series Final 16 (-70 kg tournament); in their first fight Petrosyan defeated Pinca by decision (2004) . Watch the video! 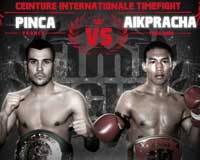 Review: 2012-01-21, after a nice first round the fight between Saenchai Sinbimuaythai and Fabio Pinca was not particularly exciting: two stars (fight ended by decision). Saenchai Sinbimuaythai (247-43-2), also known as Saenchai Sor Kingstar, entered as the No.1 lightweight in the world while Fabio Pinca (83-15-4) entered as the No.8 welterweight. Saenchai vs Pinca 2 is on the undercard of Buakaw vs Askerov 2 (Yokkao Extreme 2012); in their first fight (Apirl 21, 2007) Saenchai defeated Pinca by unanimous decision. Watch the video!