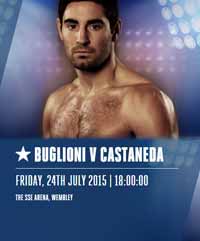 Review by AllTheBestFights.com: 2015-07-24, disappointing fight between Frank Buglioni and Fernando Castaneda: it gets two stars.

Frank Buglioni entered this fight with a professional boxing record of 16-1-1 (12 KOs=75%) and he is ranked as the No.61 super middleweight in the world while his opponent, Fernando Castaneda, has an official record of 23-9-0 (14 knockouts). Buglioni suffered his only loss in 2014 when he faced Sergey Khomitsky (=Buglioni vs Khomitsky), since then he has collected four victories and one draw, against Lee Markham in his last bout (one of the best fights of 2015 Buglioni vs Markham). Buglioni vs Castaneda is valid for the vacant WBA Inter-Continental super middleweight title. Watch the video and rate this fight!