Review: 2014-05-24, nice exchanges and great finish: David Lemieux vs Fernando Guerrero gets three stars. David Lemieux entered this fight with a pro boxing record of 31-2-0 (29 KOs=93%) and he is ranked as the No.15 middleweight in the world, he suffered both his losses in 2011 when he was just 22 years old and he faced Marco Antonio Rubio (=Rubio vs Lemieux) and Joachim Alcine (=Alcine vs Lemieux); since then he has collected six consecutive wins.
His opponent, Fernando Guerrero, has a record of 26-2-0 (19 knockouts) and he entered as the No.30 in the same weight class, last year he had his first world tilte-shot when he faced Peter Quillin but he lost by tko (=Quillin vs Guerrero); after that bout he has fought and won once defeating Raymond Gatica. Lemieux vs Guerrero is valid for the vacant NABF middleweight title; undercard of Adonis Stevenson vs Andrzej Fonfara. Watch the video and rate this fight!

END_OF_DOCUMENT_TOKEN_TO_BE_REPLACED 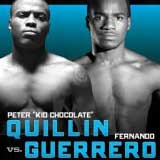 Review: 2013-04-27, exciting fight with four knockdowns: Peter Quillin vs Fernando Guerrero is close to get four stars. The undefeated Peter Quillin (28-0-0- 20 KOs) entered as the No.4 middleweight in the world while Fernando Guerrero (25-1-0, 19 KOs) entered as the No.26. Quillin vs Guerrero is valid for the WBO middleweight title (Quillin’s first defense); undercard of Danny Garcia vs Zab Judah. Watch the video!

END_OF_DOCUMENT_TOKEN_TO_BE_REPLACED

Review: 2012-07-14, pleasant fight with one knockdown but it is not enough to get three stars. Fernando Guerrero (23-1-0) entered as the No.28 middleweight in the world while Jose Medina (17-10-1) entered as the No.72. Guerrero vs Medina is on the undercard of Amir Khan vs Danny Garcia . Watch the video!