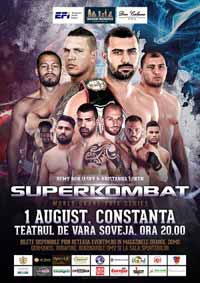 Review by AllTheBestFights.com: 2015-08-01, disappointing fight between Andrei Stoica and Fred Sikking: it gets two stars.

Andrei Stoica entered this fight with a professional kickboxing record of 38-6-0 (24 knockouts) and he is ranked as the No.8 super cruiserweight in the world while his opponent, Fred Sikking, has an official record of 45-19-1 and he entered as the No.14 in the same weight class. Stoica suffered his last defeat in 2014 when he faced Danyo Ilunga (=Ilunga vs Stoica), after this bout he has won six fights beating Abdarhmane Coulibaly in his last one (=Stoica vs Coulibaly). Stoica vs Sikking, main event of SuperKombat WGP 4, is valid for the SuperKombat super cruiserweight title (Stoica’s third defense). Watch the video and rate this fight!