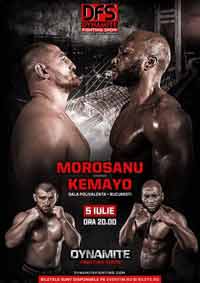 Review by AllTheBestFights.com: 2018-07-05, pretty good fight between Catalin Morosanu and Freddy Kemayo 3: it gets three stars.

The former SuperKombat champion Catalin Morosanu entered this fight with a professional kickboxing record of 44-12-0 (26 knockouts) and he is ranked as the No.13 heavyweight in the world but he won just two out of his last six bouts, against Maurice Greene (Morosanu vs Greene) and Lukasz Krupadziorow (Morosanu vs Krupadziorow); after this fight he lost to Michal Turynski (Catalin Morosanu vs Michal Turynski).
His opponent, the former Iska and Wako pro world champion , has an official record of 70-26-1 (48 knockouts) but he comes off three consecutive losses, with Zinedine Hameur-Lain, Igor Bugaenko and Zabit Samedov. In their first bout Morosanu was defeated by Kemayo by ko (April 26, 2008) while in their second fight Catalin took revenge on him by unanimous decision (November 6, 2008); Morosanu vs Kemayo 3 is the main event of Dynamite Fight Show – DFS. Watch the video and rate this fight!

Review: 2014-08-04, the fight between Peter Aerts and Freddy Kemayo gets two stars. The 43-year-old Peter Aerts (11 years older than Kemayo) entered this fight with a kickboxing record of 105-32-2 (79 KOs=75%) and he is ranked as the No.8 heavyweight in the world but in his last seven fights he won just twice: against “Mr. Kamikaze” in 2011 and against Jamal Ben Saddik in 2013 (=Aerts vs Saddik); after this bout he lost to Rico Verhoeven (by split decision, Aerts vs Verhoeven) and he drew against Dewey Cooper.
His opponent, Freddy Kemayo, has an official record of 66-20-1 (46 knockouts) and he entered as the No.17 in the same weight class, he suffered his last loss in 2012 when he faced Pavel Zhuravlev, since then he has collected six consecutive wins. Aerts vs Kemayo is on the undercard of Jerome Le Banner vs Colin George. Watch the video and rate this fight!

Review: 2012-12-22, very tough fight with one knockdown: Sergei Lascenko vs Freddy Kemayo 2 gets three stars. Sergei Lascenko (Serhiy Lashchenko) ranked as the No.12 heavyweight in the world, entered the fight with a record of 29-11-0 while Freddy Kemayo had a record of 60-20-1. In their first fight Kemayo defeated Lascenko by unanimous decision (May 21, 2010); this second fight is a heavyweight superfight of SuperKombat WGP 2012 Final. Watch the video!

Review: 2012-07-07, nice and tough fight between Ismael Londt and Freddy Kemayo, if the first two rounds were like the third one it would get four stars. Ismael Londt ranked as the No.13 heavyweight in the world, entered the fight with a record of 28-3-1 while Freddy Kemayo had a record of 60-19-1. Londt vs Kemayo is valid for the Superkombat Heavyweight title, main event of SuperKombat WGP 10. Watch the video!

Review: 2012-03-10, very tough and balanced fight between Freddy Kemayo and Igor Jurkovic: three stars (fight ended by majority decision). Freddy Kemayo entered the fight with a record of 60-18-1 while Igor Jurkovic had a record of 43-4-0. Kemayo vs Jurkovic is on the undercard of Cro Cop Filipovic vs Ray Sefo (Cro Cop Final Fight). Watch the video!