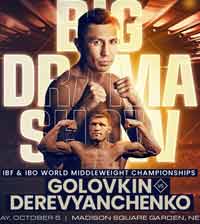 Review by AllTheBestFights.com: 2019-10-05, one sided fight between Ivan Baranchyk and Gabriel Bracero: it gets two stars.

The 2009 world amateur junior and former IBF super-Lw champion Ivan Baranchyk entered this fight with a pro record of 19-1-0 (12 knockouts) and he is ranked as the No.14 super lightweight in the world but he comes off his first loss, suffered against Josh Taylor in May 2019 (Josh Taylor vs Ivan Baranchyk); before this bout, in 2018, he had beat Petr Petrov (Ivan Baranchyk vs Petr Petrov) and Anthony Yigit (Ivan Baranchyk vs Anthony Yigit).
His opponent, Gabriel Bracero, has an official boxing record of 25-3-1 (6 knockouts) and he entered as the No.104 welterweight. He was defeated by Paul Malignaggi in 2016 then he tied with Thomas LaManna and beat Artemio Reyes. Baranchyk vs Bracero is valid for the vacant WBA Inter-Continental super lightweight title; undercard of Gennady Golovkin vs Sergiy Derevyanchenko. Watch the video and rate this fight!