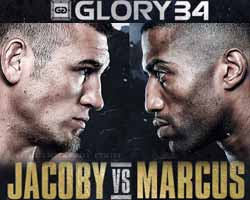 Review by AllTheBestFights.com: 2016-10-21, disappointing fight between Simon Marcus and Dustin Jacoby: it gets two stars.

The former Glory and Wbc muay thai light-Hw champion Simon Marcus entered this fight with a pro kickboxing record of 44-3-2 (24 knockouts) and he is ranked as the No.2 cruiserweight in the world while his opponent, Dustin Jacoby, has a record of 9-7-0 (8 knockouts) and he entered as the No.6 in the same weight class. Both fighters have fought three times in 2016 losing their last bout: Jacoby has lost to Marcus in May (=Marcus vs Jacoby I) but before he had won over Karl Roberson and Wayne Barrett while Marcus, who was defeated by Jason Wilnis just in September (4-stars fight, Marcus vs Wilnis 2), had won also with Artem Levin (=Levin vs Marcus 3). Marcus vs Jacoby 2 is on the undercard of Nieky Holzken vs Murthel Groenhart 3 – Glory 34. Watch the video and rate this fight! 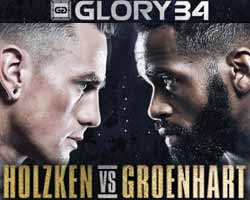 The Glory Ww champion Nieky Holzken entered this fight with a professional kickboxing record of 89-11-0 (46 knockouts) and he is ranked as the No.1 super middleweight in the world. He suffered his last defeat when he faced L’houcine Ouzgni in 2012, since then he has collected ten consecutive victories winning the Glory Ww tournament in 2013, beating Joseph Valtellini in the final (=Valtellini vs Holzken) and defeating Yoann Kongolo in his last fight (=Nieky Holzken vs Yoann Kongolo).
His opponent, the former K-1 world Max champion Murthel Groenhart, has an official record of 63-22-3 (35 knockouts) and he entered as the No.3 in the same weight class. He has already fought seven times in 2016 losing twice, against Cedric Doumbe (=Groenhart vs Doumbe) and Artur Kyshenko (=Kyshenko vs Groenhart 2), but he defeated Yoann Kongolo (=Groenhart vs Kongolo) and Jonatan Oliveira in his last two bouts. In their two previous fights Holzken beat Groenhart via decision both in 2010 and in 2015 (=Holzken vs Groenhart 2). Holzken vs Groenhart 3, main event of Glory 34, is valid for the Glory welterweight title. Watch the video and rate this fight! 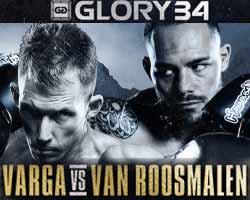 Review by AllTheBestFights.com: 2016-10-21, nice and tough fight between Robin van Roosmalen and Gabriel Varga: it gets three stars.

The black belt in karate, former WKN Lw and current Glory Fw champion Gabriel Varga entered this fight with a kickboxing record of 13-3-0 (1 knockout) and he is ranked as the No.7 super lightweight in the world. He lost to Sergey Adamchuk last year (=Varga vs Adamchuk I) but then he has beat Liu Wei and he has taken revenge on Adamchuk in 2016 (=Adamchuk vs Varga 2).
His opponent, the black belt in judo and former Glory Lw champion Robin van Roosmalen, has a record of 47-15-3 (14 knockouts) and he entered as the No.3 super welterweight but he comes off the loss against Sitthichai Sitsongpeenong (=Roosmalen vs Sitthichai 2). Varga vs Roosmalen is valid for the Glory featherweight title; undercard of Nieky Holzken vs Murthel Groenhart 3 – Glory 34. Watch the video and rate this fight!