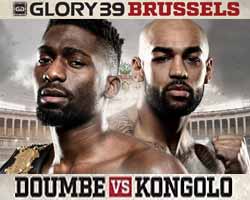 Review by AllTheBestFights.com: 2017-03-25, fight not particularly good between Cedric Doumbe and Yoann Kongolo 3: it gets two stars.

The Glory Ww and WAKO Pro Mw champion Cedric Doumbe entered this fight with a professional kickboxing record of 65-5-1 (39 knockouts) and he is ranked as the No.1 super middleweight in the world. He lost to Fang Bian at the beginning of 2016 but then he has won 10 consecutive fights beating Nieky Holzken in his last one (=Holzken vs Doumbe).
His opponent, the black belt in karate and former Wkn super-Mw champion Yoann Kongolo, has an official record of 64-8-0 (41 knockouts) and he entered as the No.5 in the same weight class. He lost twice last year, against Nieky Holzken (=Holzken vs Kongolo) and Murthel Groenhart (=Groenhart vs Kongolo) but he came back to win in 2017 defeating Konstantin Khuzin and Karim Benmansour. In their previous bouts Kongolo beat Doumbe both in 2014 and in 2015; this third fight, main event of Glory 39, is valid for the Glory welterweight title (Doumbe’s first defense). Watch the video and rate this fight! 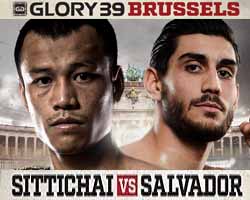