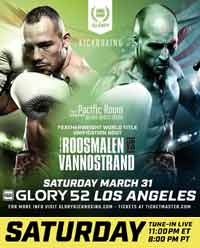 Review by AllTheBestFights.com: 2018-03-31, pretty good fight between Simon Marcus and Zack Wells: it gets three stars.

The former Glory Mw and Wbc light-Hw champion Simon Marcus entered this fight with a pro kickboxing record of 47-4-2 (26 knockouts) and he is ranked as the No.2 cruiserweight in the world while his opponent, the undefeated Zack Wells, has a perfect record of 4-0-0. Marcus fought twice last year beating Jason Wilnis (Wilnis vs Marcus 3) and losing with Alex Pereira (Simon Marcus vs Alex Pereira). Marcus vs Wells is on the undercard of Robin van Roosmalen vs Kevin VanNostrand – Glory 52. Watch the video and rate this fight! 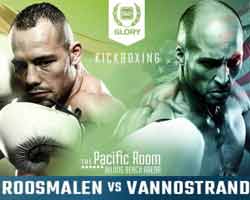 Review by AllTheBestFights.com: 2018-03-31, good fight between Robin van Roosmalen and Kevin VanNostrand: it gets three stars.

The current Glory Fw and former Glory Lw champion Robin van Roosmalen entered this fight with a professional kickboxing record of 50-16-3 (13 knockouts) and he is ranked as the No.5 welterweight in the world. He lost the rematch with Sitthichai Sitsongpeenong in 2016 (Roosmalen vs Sitthichai 2) but then he has won four fights beating Petchpanomrung Kiatmookao (Roosmalen vs Petchpanomrung) and Sergey Adamchuk in his last two (Robin van Roosmalen vs Sergey Adamchuk).
His opponent, the interim Glory Fw champion Kevin VanNostrand, has an official record of 17-1-0 and he entered as the No.9 in the same weight class. He suffered his only loss when he faced Giga Chikadze in 2016 (Vannostrand vs Chikadze), after this bout he has won four fights taking revenge on Chikadze in 2017 and then defeating Mo Abdurahman and Anvar Boynazarov (Kevin VanNostrand vs Anvar Boynazarov). Roosmalen vs VanNostrand, main event of Glory 52, is valid for the Glory featherweight championship title. Watch the video and rate this fight!