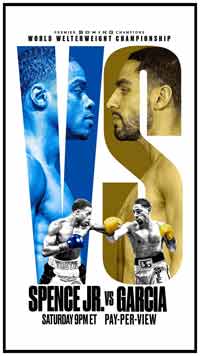 Review by AllTheBestFights.com: 2020-12-05, one sided fight between Sebastian Fundora and Habib Ahmed: it gets two stars (take a look at our ranking of the best boxing fights of 2020).
The undefeated Sebastian Fundora entered this fight with a pro boxing record of 15-0-1 (10 knockouts) and he is ranked as the No.18 super welterweight in the world. In his last three bouts he has tied with Jamontay Clark in 2019 but then he has won over Daniel Lewis and Nathaniel Gallimore (Sebastian Fundora vs Nathaniel Gallimore).
His opponent, Habib Ahmed, has a record of 27-1-1 (18 knockouts) and he entered as the No.290 super middleweight. He was defeated by Gilberto Ramirez in 2018 (Gilberto Ramirez vs Habib Ahmed) but then he has beat Sunday Ajuwa and Juan De Angel; after these bouts he has also faced Alantez Fox but the fight ended in a no-contest. Ahmed vs Fundora is on the undercard of Errol Spence Jr vs Danny Garcia. Watch the video and rate this fight!

END_OF_DOCUMENT_TOKEN_TO_BE_REPLACED 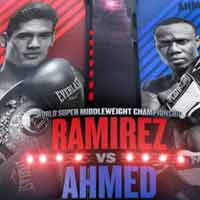 Review by AllTheBestFights.com: 2018-02-03, nice exchanges between Gilberto Ramirez and Habib Ahmed: it gets three stars.

Both undefeated, the Wbo super-Mw champion Gilberto Ramirez Sanchez entered this fight with a perfect record of 36-0-0 (24 knockouts) and he is ranked as the No.2 super middleweight in the world (currently the #1 in this division is Chris Eubank Jr) while his opponent, Habib Ahmed, has an official record of 25-0-1 (17 knockouts). Both boxers fought twice in 2017: ‘Zurdo’ Ramirez defeated Max Bursak (=Ramirez vs Bursak) and Jesse Hart (=Ramirez vs Hart) while Ahmed beat Philip Kotey and Flash Issaka. Ramirez vs Ahmed is valid for the WBO World super middleweight title (Ramirez’s third defense). Watch the video and rate this fight!