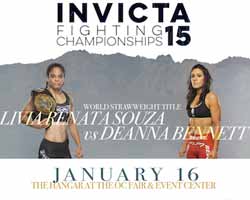 Review by AllTheBestFights.com: 2016-01-16, fight not so exciting between Livia Renata Souza and DeAnna Bennett: it gets two stars.

Both undefeated, the Brazilian Livia Renata Souza entered this fight with a pro mma record of 8-0-0 (88% submission victory rate – she has never won via ko/tko) and she is ranked as the No.5 women’s strawweight in the world while her opponent, DeAnna Bennett, has an official record of 8-0-0 (50% finishing rate) and she entered as the No.3 in the same weight class. Souza fought just once last year winning the Invicta Fc title against Katja Kankaanpaa while Bennett fought twice beating Norma Rueda Center and Katja Kankaanpaa as well. ‘Livinha’ Souza vs Bennett is valid for the Invicta FC strawweight title (Souza’s first defense); undercard of Cristiane ‘Cyborg’ Justino vs Daria Ibragimova – Invicta FC 15. Watch the video and rate this fight! 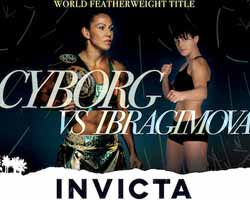 Review by AllTheBestFights.com: 2016-01-16, good finish between Cris Cyborg Justino and Daria Ibragimova: it gets three stars.

The former Strikeforce women’s Fw champion Cristiane ‘Cyborg’ Justino entered this fight with a professional mma record of 14-1-0 (86% ko/tko victory rate – she has never won via submissiom) and she is ranked as the No.1 women’s featherweight in the world. Cris Cyborg Santos suffered his only loss at her pro mma debut, against Erica Paes in 2005, since then she has won 14 consecutive bouts winning the Invicta Fw title in 2013, against Marloes Coenen (=Cyborg vs Coenen 2), and defending it twice, with Charmaine Tweet (=Justino vs Tweet) and Faith Van Duin (=Justino vs Van Duin).
Her opponent, Daria Ibragimova, has an official record of 9-1-0 (89% finishing rate) and she entered as the No.10 in the same weight class. She fought three times last year beating Mariam Khalilova, Anastasia Kravets and Anastasia Plisenkova. Justino vs Ibragimova, main event of Invicta FC 15, is valid for the Invicta FC featherweight title (Cyborg’s third defense). Watch the video and rate this fight!