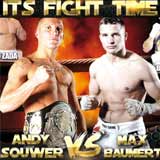 Review by AllTheBestFights.com: 2014-10-18, good fight between Andy Souwer and Max Baumert: it gets three stars.

The two times K-1 world Max champion Andy Souwer entered this fight with a pro kickboxing record of 152-16-1 (88 knockouts) and he is ranked as the No.9 super welterweight in the world, he has already fought four times in 2014 losing twice: against Tsukuru Midorikawa and Mustapha Haida (in his last bout); between these two bouts he beat Yury Bessmertny (=Souwer vs Bessmertny) and Yasuhiro Kido.
His opponent, the 22-year-old Max Baumert (nine years younger than Souwer), has a record of 11-3-0 (3 knockouts) and he entered as the No.22 in the same weight class, he fought three times in 2014 losing once to Martin Gano. Souwer vs Baumert is the main event of “It’s Fight Time”. Watch the video and rate this fight!