Review: 2014-06-07, good fight between Rafael dos Anjos and Jason High: it gets three stars. The black belt in Bjj Rafael dos Anjos entered this fight with a mma record of 20-7-0 (50% finishing rate) and he is ranked as the No.13 lightweight in the world, he comes off the loss against the undefeated Khabib Nurmagomedov (=Nurmagomedov vs dos Anjos).
His opponent, Jason High, has an official record of 18-4-0 (61% finishing rate) and he entered as the No.34 welterweight, he fought three times in 2013 losing to Erick Silva (=Silva vs High) and winning over James Head and Anthony Lapsley; in this bout Jason High moved down in weight class to the lightweight division. Dos Anjos vs High is on the undercard of Benson Henderson vs Rustam Khabilov – UFC Ufn 42. Watch the video and rate this fight! 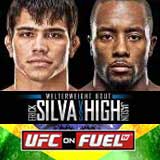 Review: 2013-06-08, Erick Silva vs Jason High gets three stars thanks to a great finish (UFC Submission of the Night). The Brazilian Erick Silva (14-3-0, 78% finishing rate) entered as the No.36 welterweight in the world while Jason High (16-3-0, 63% finishing rate) entered as the No.43. Silva vs High is on the undercard of Antonio Rodrigo Nogueira vs Fabricio Werdum 2 – UFC on Fuel TV 10. Watch the video!