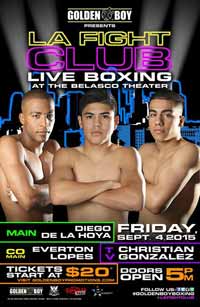 Jesus Ruiz entered this fight with a professional boxing record of 34-6-5 (23 knockouts) and he is ranked as the No.27 super bantamweight in the world. He has fought twice in 2015 losing to Leo Santa Cruz (=Santa Cruz vs Ruiz) and winning over Saul Hermosillo.
His opponent, the undefeated Diego De La Hoya (cousin of Oscar De La Hoya), has a perfect record of 11-0-0 (7 knockouts) and he entered as the No.64 in the same weight class. He has already fought three times in 2015 beating Manuel Roman (=De La Hoya vs Roman), Ramiro Robles and Jose Estrella. Ruiz vs De La Hoya is valid for the vacant WBC Youth World super bantamweight title. Watch the video and rate this fight!

Review by AllTheBestFights.com: 2015-01-17, good fight between Leo Santa Cruz and Jesus Ruiz: it gets three stars.

The undefeated Leo Santa Cruz entered this fight with a pro boxing record of 28-0-1 (16 knockouts) and he is ranked as the No.3 super bantamweight in the world (currently the #1 in this division is Guillermo Rigondeaux); the only man who stopped him in a draw was Rodrigo Hernandez at his second professional bout (when he was 18 years old). ‘Teremoto’ Santa Cruz fought twice in 2014 beating Cristian Mijares (=Santa Cruz vs Mijares) and Manuel Roman (=Santa Cruz vs Roman).
His opponent, Jesus Ruiz, has an official record of 33-5-5 (22 knockouts) and he entered as the No.31 in the same weight class, he suffered his last defeat in 2012 when he faced Christian Esquivel, since then he has collected one draw and five consecutive wins, the last one against Leonilo Miranda. Santa Cruz vs Ruiz is valid for the WBC World super bantamweight title (Santa Cruz’s fourth defense) first world title shot for Ruiz; undercard of Bermane Stiverne vs Deontay Wilder. Watch the video and rate this fight!