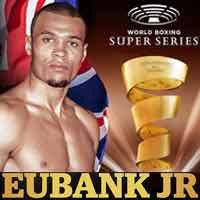 Review by AllTheBestFights.com: 2018-09-28, disappointing fight between Chris Eubank Jr and JJ McDonagh: it gets two stars.

The former interim Wba Mw and Ibo super-Mw champion Chris Eubank Jr entered this fight with a boxing record of 26-2-0 (20 KOs=77%) and he is ranked as the No.3 super middleweight in the world but he comes off the loss against current #1 George Groves (Chris Eubank Jr vs George Groves). Before this bout, in 2017, he had beat Renold Quinlan (Eubank Jr vs Quinlan), Arthur Abraham (Eubank vs Abraham) and Avni Yildirim (Chris Eubank Jr vs Avni Yildirim).
His opponent, JJ McDonagh, has an official record of 16-4-0 (8 knockouts) and he entered as the No.177 middleweight. He has already fought three times in 2018 defeating Cristian Aguilar and Gerard Healy but between these two bouts he lost to Roy Sheehan. Eubank vs McDonagh is on the undercard of George Groves vs Callum Smith. Watch the video and rate this fight!