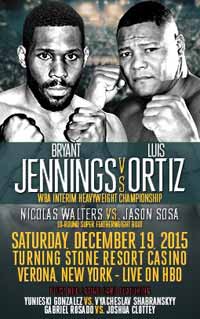 Review by AllTheBestFights.com: 2015-12-19, good fight between Joshua Clottey and Gabriel Rosado: it gets three stars.

The former IBF Ww champion Joshua Clottey entered this fight with a professional boxing record of 39-4-0 (22 knockouts) and he is ranked as the No.24 super welterweight in the world. He suffered two consecutive losses between 2009 and 2010, against Miguel Cotto and Manny Pacquiao, but since then he has won four bouts beating Anthony Mundine (=Mundine vs Clottey) and Jorge Silva in his last two fights.
His opponent, Gabriel Rosado, has an official record of 21-9-0 (13 knockouts) but he is not ranked as he hasn’t fought since December 6, 2014 when he was defeated by David Lemieux (=Lemieux vs Rosado); before this fight he had also lost to Jermell Charlo (=Charlo vs Rosado) and Peter Quillin (=Quillin vs Rosado). Clottey vs Rosado is on the undercard of Bryant Jennings vs Luis Ortiz. Watch the video and rate this fight! 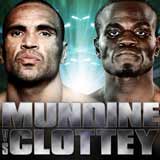 Review: 2014-04-09, pretty good fight with five knockdowns between Anthony Mundine and Joshua Clottey but it is not enough to get three stars. Anthony Mundine entered this fight with a professional boxing record of 46-5-0 (27 knockouts) and he is ranked as the No.5 light middleweight in the world, last year he fought twice losing the rematch against Daniel Geale (=Geale vs Mundine 2) but then he managed to defeat Shane Mosley (=Mosley vs Mundine); he has already fought and won in 2014 against Gunnar Jackson.
His opponent, Joshua Clottey, has an official record of 37-4-0 (22 knockouts) and he entered as the No.57 in the same weight class, he is 36 years old, two years younger than Mundine, but he fought just once in the last two years winning over Dashon Johnson. Mundine vs Clottey is valid for the WBA International light middleweight title. Watch the video and rate this fight!