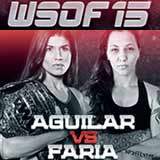 Review: 2014-11-15, fight not particularly good between Jessica Aguilar and Kalindra Faria: it gets two stars. Jessica Aguilar entered this fight with a mma record of 18-4-0 (56% finishing rate) and she is ranked as the No.1 women’s strawweight in the world, she suffered her last defeat (via split decision) in 2010 when she faced Zoila Frausto Gurgel at Bellator 31, since then she has collected nine consecutive victories; Aguilar won the Wsof belt at the beginning of 2014 beating Alida Gray (=Aguilar vs Gray) and she successfully defended the title once against Emi Fujino (=Aguilar vs Fujino).
Her opponent, Kalindra Faria, has an official record of 15-3-1 (67% finishing rate) and she entered as the No.5 in the same weight class, she lost her last fight in 2011 when she faced Vanessa Porto, after that bout she won eleven consecutive fights. Aguilar vs Faria is valid for the WSOF women’s strawweight title (Aguilar’s second defense); undercard of David Branch vs Yushin Okami – WSOF 15. Watch the video and rate this fight!